I didn’t want to start this review with the same old moans about how great music was in the past and how boring it is now. But I will. I love being an old fart. In the evolution of rock, let’s say from “Rock Around The Clock” until now, there has been some periods, clear evolutions and devolutions that led us to what the music market is now: music either impersonating past eras on an embarrassing parody, either bland and unbearably safe. Live venues are polluted by cover bands and audiences are fooled to the point of thinking that Muse is really a rock band. Where are the melodies?

Most known for his huge knowledge on synthesizers and his flair to discover unique artists all over the world, Brick Bosso somehow decided, maybe without even knowing it, to become the most British act from California.

The press release is as short as it can be, stating that “Equipped with only a minimalist studio and guitars, tons of talent, and his curse-breaking tenacity, Brick Bosso finally releases his debut album.” 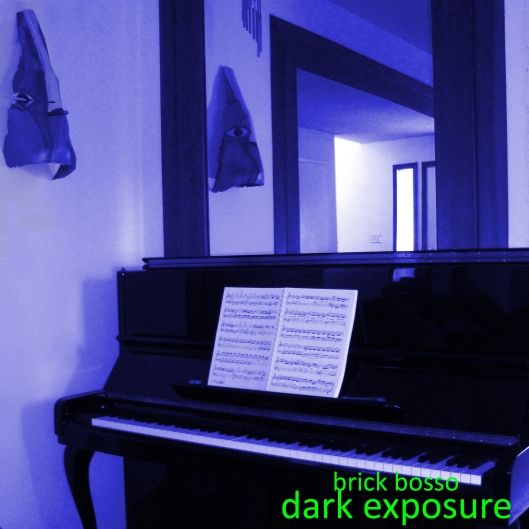 When asked to clarify the issue of the music style he’s conveying, Bosso keeps it vague: “I’m happy to tell some stories in songs– stories that I might not have had a chance to articulate if I hadn’t picked up my guitar.”

Stories. “Dark Exposure” is all about stories, articulated words matching their melody that could almost rank Bosso in the crooner box. “I think the thing I value most about writing songs is the ability to tell stories and present views of things that are unusual or awkward to express in everyday life.”

On the short 35 minutes spread into 12 songs (two being download bonuses), Brick Bosso shows a talent that may hide a devouring ambition to conquer a niche and crush other musicians. But always unassuming, he humbly states that “Ideally the album will get just enough attention to attract a few musicians so I can assemble a team, kind of like the way The Avengers or The Justice League were assembled, only on a much, much smaller budget, and even louder.”

“Dark Exposure” has what a good album needs: an unity and enough variety to keep the listener satisfied, from the first notes of the sunny beach anthem “Watching The Sun Come Up” to the last beat of the acoustic-driven “Strange Transcendent Mary”, making Mary rhyme with Hello Kitty under a comfy blanket of Mellotron strings.

I told before that Bosso had a soft spot for analog machines, yet the synthesizers are strangely low-key in the record. They make an apparition here and there, but besides the New Order infused “The Day And The Night” and its dissonant guitars fighting with an uncontrollable synth-bass, they mostly leave space for a dominative Farfisa organ, sometimes 60s on steroids, sometimes even punk (“Was”). The organ leaves its comfort zone to do the perfect match with new-wave guitars on the fascinating “Flow With It”, or sympathises with an almost industrial drum machine on “True Believer”.

The 60’s feel comes here and there, especially with “Mary On My Mind” that sounds McCartney-ish even before hearing some of the confirming lyrics.

The obvious single that could smash the radios is the infectious “Here Comes Mr. Faketapes”, that asks for explanation, such a title being obviously anything but innocent. Brick Bosso provides it when asked about the future of his promising musical career. Brick Bosso came on album as unexpectedly as he might withdraw, since he’s not a heavy planner and when asked if he could release something new sometimes near, he smiles and shrugs:

“Well, now that I’ve called out the false claimants (Find Your Heart Again), criticized the tape fabricators (Here Comes Mr. Faketapes) and addressed Marian apparitions (Strange Transcendent Mary), there’s not much more for me to do, other than sit back and play my ukulele.”

Seeing that his statement was hard to believe from such a creative man, he slightly corrects: “I’m tinkering with some other songs, but as far as making “dark exposure” suddenly obsolete by creating a follow up, I’m not ready for that yet.”

Really? Can this be true. Bosso looks irritated and, as if he wanted to please us just to get rid of annoying questions, he closes the interview by dropping “I really don’t know what’s next. I’m writing some more in a more classic rock and blues vein, this time mostly using piano. We’ll see.”

Yes we’ll see. And in waiting, let’s keep on hearing and listening to the “Dark Exposure” album from someone who’ll get to be known, despite himself, maybe.

Album purchase includes two bonus tracks, “Conversations (We Might Have Had)” and “Waiting For The Paradox”.