In a past life, Awaken released an album called “Party in Lyceum’s Toilets“, which featured, amongst other cult songs, a version of “Jazzy”, a cute tune written by ex-Metropolis pianist Renaud Lhoest. One of the last days of December 2014, Renaud Lhoest passed away.

GS: “He wasn’t exactly a friend, and this is an understatement to say that I didn’t have any kind of contact with the guy on more than 20 years, but I’ll always be grateful for his help and kindness (and patience) with the young and hesitating Snowcat that I was back in 1988 (a very good year, it was). He then just had released a demo tape, “Les Vacances de Julie”, that ran over and over on my magic Radio-Shack cassette player, in order to steal an idea or two, which I somehow managed. Somehow.

The tape was brought to me by his then bass player, Ced Mattys, who later ended to play on an album of mine. It was worth 150 Bef (a rough 4 euros and 50 cents now), that I actually never paid.”

He later became an overbooked arranger, composer and violinist playing with a variety of artists from obscure Belgian acts to the likes of Robert Plant and Jimmy Page. Call it a huge wingspan.

May Renaud Lhoest have a drink with John Bonham up-there and ask him what he thought of that fake-Zeppelin incarnation. But that’s another story.

Listen to Renaud Lhoest’s own music

Listen to Awaken’s take on “Jazzy” 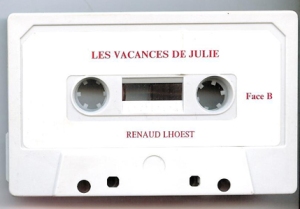